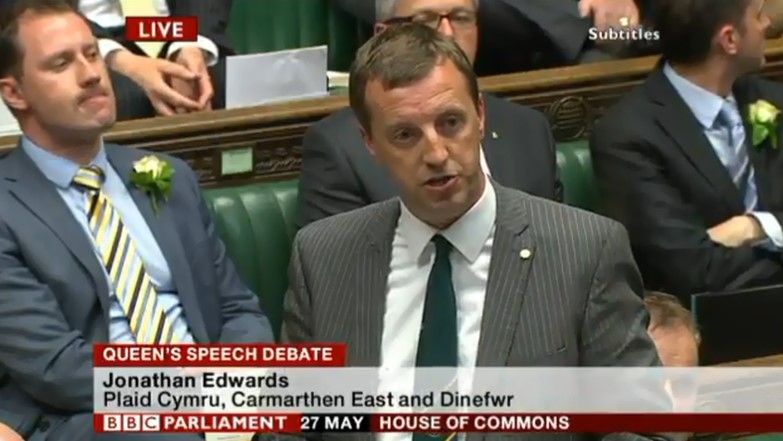 Jonathan Edwards (Carmarthen East and Dinefwr) (PC): It is a pleasure to take part in this debate and to respond to the Gracious Speech on behalf of Plaid Cymru. It is also a pleasure to follow the right hon. and learned Member for Beaconsfield (Mr Grieve), whose speech I will refer to later in my contribution, especially his very valid points on the Human Rights Act. I would like to begin by congratulating the Conservative party on its victory—it is probably the only positive thing I am going to say about the Government over the next five years, so I thought I had better get it out of the way now.

It is fair to say that not many political commentators were expecting a Conservative majority Government, and therefore the legislative landscape announced today is significantly different from what had been anticipated. Before commentating on the content of the Gracious Speech, I would like to say that this Government seem to me, despite being a single-party majority Government, to be far weaker than the previous coalition Government. A majority of 12 can disappear very quickly, especially knowing the independent inclinations of many Tories.

The Gracious Speech includes many potential pitfalls for the new Government, not least the Achilles heel of the Conservative party—Europe. I often felt during the previous Parliament that the Liberal Democrats served a very useful function for the Prime Minister, not only in terms of voting fodder, but primarily by allowing him to tame the Eurosceptic, right-wing element on his Back Benches by saying that he was being held back by his junior coalition partner. That buffer has now gone, and the new Administration could well find themselves at the mercy of restless and troublesome Back Benchers very soon.

Turning to the Gracious Speech, I would like to concentrate on a few of the most important aspects as far as Wales is concerned. On becoming parliamentary leader of the Plaid Cymru group, I highlighted three key immediate aims for my party, based on the new Government’s likely legislative programme. The first is to ensure that Wales gets more than crumbs from the Westminster table. Faced with an electoral revolution in Scotland, there is little doubt that Westminster will have to concede significant powers to the Scottish Parliament. The recommendations of the Smith Commission are not likely to prove enough, as we will discover when the proposed Scotland Bill progresses. In Northern Ireland, even Unionists are demanding further powers from Westminster. Most recently, the UK Government conceded full corporation tax powers. With that in mind, I remind them of the findings of their own commission on further powers for Wales: it recommended that if corporation tax powers were given to Northern Ireland, they should also be given to Wales. 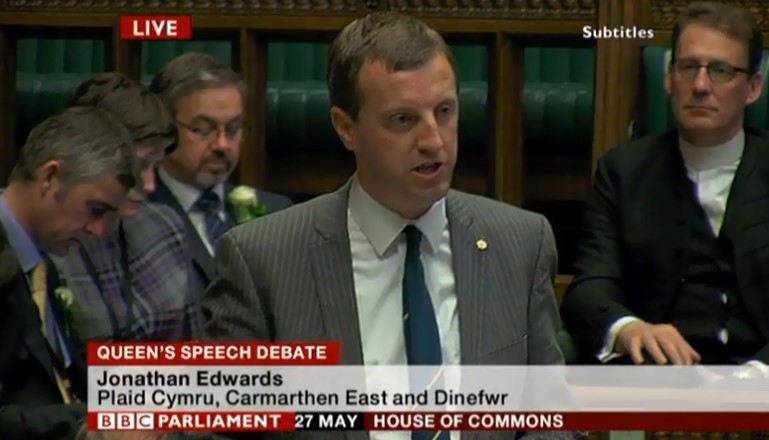 In England, it is reported that the cities and local government devolution Bill will fully devolve powers over transport, planning, housing and—critically—policing. That means that some cities in England will have more powers than the sovereign national Parliament of Wales. What is more, those powers are being handed out across the UK without any requirement for referendums, while both the Labour and Conservative parties conspire to put as many stumbling blocks as possible in the way of further progress for Wales.

My country will not be left behind. I warn the UK Government that the most powerful message in Welsh politics is about equality with Scotland. There will be a heavy price to pay at the ballot box at next year’s National Assembly elections if the Westminster parties continue to treat Wales like a second-class nation.

Unionists have one chance left to save the Union. The situation is crying out for a statesman with a vision to create a sustainable framework for the future. It is clear to me that the asymmetric nature of constitutional developments within the UK is unstable. Far be it from me to offer advice; as a Welsh nationalist, I am committed to campaigning for the political independence of my country. However, if the UK is to survive it is clear to me that only a genuine partnership of equals, based on confederal principles, will work. As I said in my acceptance speech earlier this month, the old Union is now dead and during this Parliament a new one will have to be forged if the British state is to survive. My colleagues and I will be fighting for the best possible deal for our country.

Geraint Davies: The Tories have said that they will legislate to stop income tax going up in England. Would the hon. Gentleman support the devolution of income tax to Wales? Does he think that that is a clever Conservative trick that says to Wales, “Instead of getting your fair share, raise your own tax on the back of your own people”? 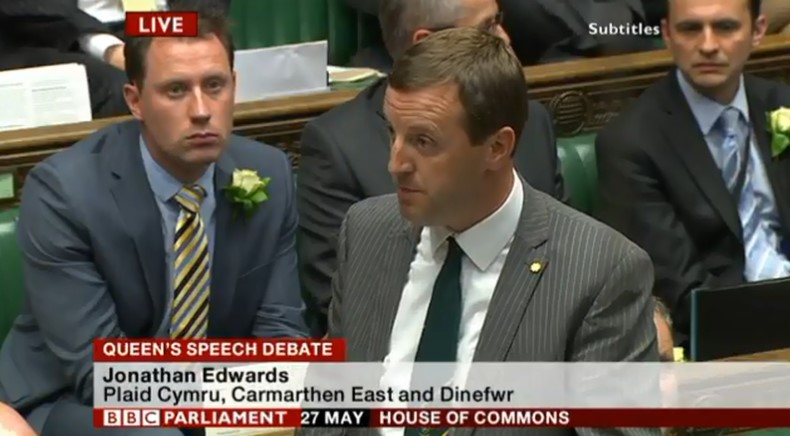 Jonathan Edwards: The hon. Gentleman is conflating two separate issues. There is the issue of fair funding for Wales, and we have a proud record of fighting for a better deal for Wales; we get a bad deal from the Barnett formula as it is currently constructed. Given that the Unionist parties have conceded that the Barnett formula will remain in stone, we believe that Wales will have the same amount of money as Scotland, which is around £1.4 billion extra for our devolved services.

Direct Westminster control has clearly completely failed the Welsh economy; the latest Eurostat figures put the communities that the hon. Gentleman and I represent at the bottom of the European Union pack, while inner London is by far the most prosperous. The only solution is for us to have control of the levers for job creation so that we can intervene in our economy.

I have called on the National Assembly to hold an urgent vote on a motion indicating its support for the Human Rights Act. If the Westminster Government were to ignore the sovereign will of the National Assembly for Wales, the matter would more than likely end up in the Supreme Court. That would have significant constitutional implications. I urge the new Secretary of State for Justice to listen to the advice of the former Attorney General, the right hon. and learned Member for Beaconsfield (Mr Grieve), who said that the Human Rights Act underpins devolved powers to Wales and that it is embedded in the constitutional settlement of devolution. The Westminster Government would find it extremely hard to scrap the Act without the express consent of the Welsh, Scottish and Northern Irish Governments. 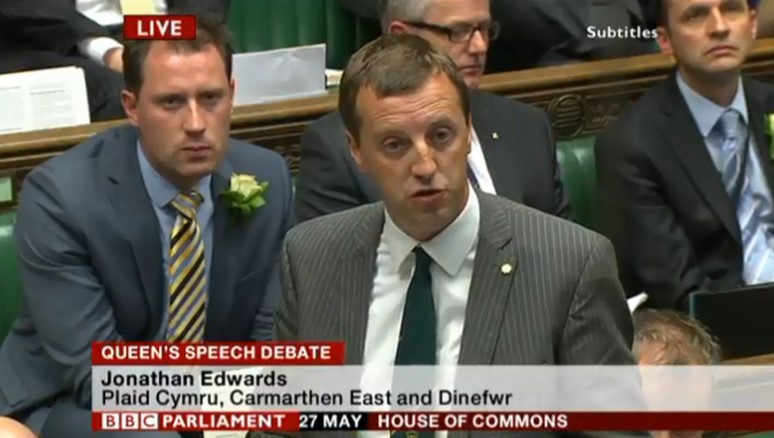 Our other major concern is the proposed legislation to enact a referendum on the UK’s membership of the European Union. I often think that the Prime Minister is tactically very clever but strategically not as astute. His posturing on Europe is a case in point. Tactically, committing to a referendum brilliantly protected his party from the UKIP insurgency and has managed to placate his restless Back Benchers—and, indeed, some of his Front Benchers. Strategically, that posturing was deficient, as it now blatantly endangers the UK’s economic future with an out vote, while also exposing his party’s major Achilles heel.

The Welsh national interest is best served by being a part of the European Union. The EU’s redistributive mechanisms have led to billions of pounds of investment in regional aid and support for the agricultural sector in Wales, in addition to access to the single market—vital for an exporting nation such as mine. Needless to say, the two main policy fields that the Westminster parties have wanted to renegotiate are the two that benefit my country the most: regional policy and agricultural support. We will seek to amend the proposed referendum Bill to ensure that the national interest of Wales is protected. If the UK is a genuine partnership of equals, Wales must not be forced out of the European Union against its will. We will seek to ensure that the constituent parts of the UK have a veto that protects their national interests when it comes to any proposed referendum.